Press Enter to search or ESC to close

Columbus, Ohio. Where to start? No matter where we start with this one, it only gets better! One needy resident received a ‘new’ home today! As one staff noted, ‘The home give-away was AWESOME!’ 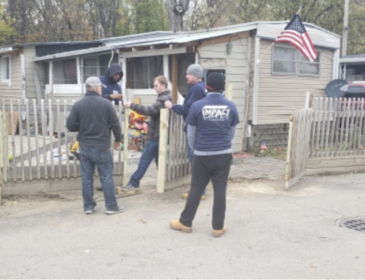 Imagine being able to bless a needy resident with a new home to live in! It’s almost hard to believe! Another staff of Impact declared, “After today, I’m in it for life, nobody is that nice and just do for others like that?” The previous Wednesday night, some of the community’s maintenance people were working until 10:30 PM getting everything ‘just so’ for handing over the keys on Saturday. When Impact Cares comes into a community, lives are changed and they certainly were that day.

It was an amazing day in other ways as well. There were 48 volunteers and we also had residents come out to help as well. So, we had people coming from a local church campus ministry, residents, staff from the local community and staff from Impact Cares. One of the amazing benefits of being able to come into a community is, if only for a short time, is to see and hear the effect it can have on people. One immigrant from a Middle Eastern country said in amazement, “This type of thing is what makes America the best place in the world. No one would ever do something like this in my home country.” That alone makes it all worth while (while also causing the ole chest to get puffed up a bit ☺).

The day itself started out a bit cold so that changed some of the plans. It was too cold to do any painting so a number of small projects were done. Screen doors repaired, leaves raked, skirting put up, some American flags handed out.

One single mom, who has a brilliant daughter in a special school, leaves for work at 6:30 and doesn’t make it back home until after 8 every day. She was so enormously grateful for the help she received and noted, ‘’God must have sent you.’ Yes, He did!

Let me close with the remarks of a Marine Vet who received a new deck and a flag – ‘Semper Fi!’ whose wife was sick and disabled who said, ‘It felt like I got a new breath of life today.’ Isn’t that what it’s all about, after all? Breathing new life into not only a local mobile home community but the staff and volunteers that come alongside to help as well.

Join our newsletter by entering your email address for updates.

Click a link below to see any of our past newsletters.